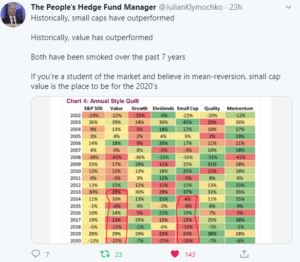 2020 has seen a major disconnect between growth and value.  In the first quarter, the Russell 1000 Pure Growth Total Return index returned -13.6%, while the Russell 1000 Pure Value Total Return index returned -35%.  If you think about the companies that are most negatively impacted by the bizarre nature of this crisis where economies across the globe have shut down, traditional value stocks show more sensitivity.  The cheap have gotten cheaper, while the most expensive have gotten more expensive.  Here is a quote from David Einhorn’s book, Fooling Some of the People All of the Time:

Market extremes occur when it becomes too expensive in the short-term to hold for the long-term.  John Maynard Keynes once said that the market can stay irrational longer than you can stay solvent.  From the peak (in March 2000), the market returned to rationality.  The leading stocks suffered a devastating bear market and value investing made a “bottom.”  These enormous excesses would be completely reversed over the next few years.

I believe there are considerable similarities between now and then.  Today, the consensus view seems to be that Amazon, Microsoft and Netflix, are no-brainers.  Back in 2000, Cisco, Microsoft, and Qualcomm, were dominant companies with amazing futures, futures that were actually realized.  Due to how excessive the valuations were at that time though, the stocks declined by 86%, 65% and 87% from their respective peaks.  The key point is that the businesses didn’t all of the sudden start doing badly.  It was the disconnect between the price and the actual value that converged.  During the same period, value stocks bottomed and many doubled or tripled in price, traditionally old economy-type stocks such as insurance companies and home builders.

In this environment, we’ve seen the cheapest sector of the market, financials get pummeled, along with other economy-sensitive companies in industries such as real estate, aviation etc.  The financials we own are positioned to survive this downturn and play a crucial part in the recovery.  The worst of the loan loss provisions are likely behind them, maybe with another quarter or two of smaller reserve builds.  Actual charge-offs are a lagging indicator.  Their book values per share, which are the best proxies for intrinsic value, held steady as most of the companies we own were profitable despite this immense crisis.  We expect that to continue to be the case for the most part, which should cause many of these stocks to see recoveries of 50-100%.  We’ve seen similar dynamics play out after previous major corrections such as 2008-2009, 2011, 2016, and 2018.

This is a very strange environment for all of us.  The stress and anxiety can be very challenging, especially if you are focused on the daily news, or daily fluctuations in stocks.  This is why we want to focus more on fundamentals.  As long as those stay solid, we will be okay.  There is a reason Buffett sold the airlines but kept all his banks.  He still loves the insurance industry and railroads.  None of us want to be in this health and financial crisis, but we are in it together and we will all come out of it.  What we don’t want to do is make the mistake of selling value at the lows and switching into growth at the high, as that is what tends to create permanent losses of capital that are tough to recover from.

I listened to a great interview with the successful hedge fund manager Bill Ackman.  Ackman is interesting because he has experienced some of the highest highs and lowest lows, of publicly known hedge fund managers.  He was asked how he handled periods of major draw-downs from a mental and financial perspective, to position himself to eventually recover.  Ackman talked about trying to take small steps each day.  You don’t want to think about trying to make it all back at once, but the compounding of those small steps will get you where you need to go.  Winds change and the current trends don’t last forever.  It’s been an awful year so far on just about every level, but it will get better.  We’ve got the seeds planted in good soil and will water them regularly.