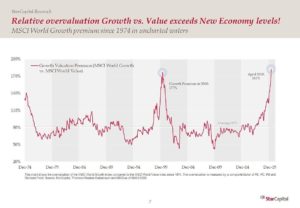 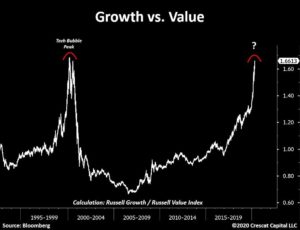 This year has been wild in many terrible ways.  One extremely painful phenomenon (for a value investor) has been the massive growth outperformance relative to value.  Coming into the year, we were at the widest relative spread between growth and value since 2000.  After the pandemic tanked stocks more closely related to the economy, the spread between growth and value valuations has broken past even those seen during the Tech Bubble.

For those that don’t remember, during the Tech Bubble, market participants that chased the most outlandishly priced stocks were rewarded richly, year after year.  The best investors in the world such as Warren Buffett, Stanley Druckenmiller, and Michael Price, were being trounced by fund managers often in their twenties, that were loading up on tech stocks.  Psychologically, it is very difficult to maintain a fundamentally disciplined investment approach when you are seeing material underpeformance, and the easy and popular buys keep rewarding others.

Barron’s even went as far as to have a cover story saying Buffett had lost his touch.  Druckenmiller got so disillusioned about underperforming with value that he hired a bunch of kids basically to buy tech stocks and he sold the value stocks.  He did this at the absolute wrong time and value took off for a decade of great returns, while the Nasdaq dropped by roughly 80%.  Druckenmiller says that was his biggest regret ever.  This valuation disparity in 2020 exceeds that!

This has been a tough year, but it isn’t over yet.  As earnings have been coming out on our key investments, I’ve been getting more encouraged, but the market really isn’t reflecting any optimism on these companies, yet it is valuing software companies at levels that are incomprehensible. Back in 2002, in the midst of the 80% collapse in the Nasdaq, Sun Microsystems CEO Scott McNealy was interviewed about the valuation the market had assigned the company during the Tech bubble.

Now let’s look at some of the glamour stocks leading the market higher.

Shopify has an enterprise value/sales ratio of 48.7.  The company trades at 301.2x earnings.

Amazon is tricky because its revenues are so huge, but even that trades with an EV/Sales of 4.1.  The P/E is 113.

Citigroup trades at 0.5x book value and 6.1x earnings and has a dividend yield of 4.5%.

I can’t tell you when the cycle will change and when value will go back in favor, but I am extremely confident in what we own and that our portfolios have never been more undervalued.  This could set us up for a heck of a next decade, as growth has been on a 14 year run.  Time will tell, but I’m really optimistic.