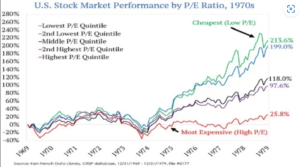 Inflation and its impact on interest rates continues to be the driving factor in financial markets and the overall economy.  There are certainly signs of inflation slowing down in a practical sense, with what we are seeing in housing, as prices decline in many of the formerly hottest markets.  That will take time to show up in the government data with how things are calculated, but it is a major change and a big reason why the Fed has taken the aggressive course that it has taken thus far to hike interest rates.  The closest parallel to this inflationary environment occurred in the mid-to-late 1970s.  As you can see in the image at the top of this email, low P/E stocks dramatically outperformed in that environment.  Now of course, past performance is not necessarily indicative of future results, but there are reasons why low P/E stocks performed so well.

P/E or price to earnings ratio, can be inversed into E/P, which is an earnings yield.  An earnings yield is the amount of money a business would pay out if it paid 100% of its income as a dividend. Let’s use Ally Financial as an example of this metric.

At a recent price of $26.07, Ally trades at about 6x normalized earnings and just 3 times trailing twelve month earnings.  The stock pays a dividend yield of 4.6% and the remaining part of its income is reinvested into the business, or used in accretive stock buybacks.  The normalized earnings yield for Ally is a staggering 23% and on a trailing twelve month basis is over 33%.  Through the first three quarters of 2022 ALLY has generated $1.603B in core net income, which is 19.67% of the market capitalization, which is just over $8B.  This is the definition of a value stock and Ally trades at just 92% of tangible book value per share.  Ally’s stock has dropped like many others, to levels which make me drool as an investor.  I wish I could buy the whole company outright, as earnings will grow substantially over the medium to long-term, and just the current cash flows alone offer a fabulous opportunity.  Pessimism is high though and Mr. Market shoots first and asks questions later.  It takes time for price to converge with intrinsic value and this is where having a reasonable amount of patience and discipline become paramount factors to being a successful investor.

This higher rate regime has created far more attractive opportunities in bonds than what has existed over the last decade or two.  High-Yield bonds are yielding close to 10%, and even investment grade bonds are yielding around 7%.  When you compare those yields to the more expensive stocks such as Tesla, which trades at 50x earnings and offers a 2% dividend yield, bonds are very competitive.  Near-term income is worth more than it was in the past because the cash flows can be reinvested at higher rates, far greater than what we saw in recent years.  These higher rates cause P/E ratios to contract, which has happened broadly for equity markets.  Our portfolios at T&T Capital Management are dominated by low P/E stocks with normalized earnings yields in the high-teens or higher.  Many of these stocks pay dividends between 4-8%, which is extremely high historically, and these are quality dividends that for the most part, should be sustainable and grow.  In my opinion, we have the best buying opportunities we’ve had since March of 2020.  I think it is very possible that just like coming out of the 1970s, or during the Tech Bust, value stocks should outperform the market by a significant margin.  These are good financially strong businesses, unlike value traps that might be in dying industries or anything like that.  Below are a few recent research reports that I’ve written for you to review at your leisure.