After Monday’s bloodbath, we have now had the 26th correction greater than 5% since the March 2009 low.  This table above shows them, and it is important to note that they all felt like very serious deals when they were occurring, but many of them seem very forgettable at this point.

Monday’s 3% selloff marked the 103rd time that the index has dropped by more than 3% since 1950.  As you can see by the second table, in most cases returns were nicely positive 6 and 12 months later.

The 30-year Treasury is now yielding an all-time low 1.84%, while the 10-year yields 1.38%, which is 1 bps above the all-time low.  High-yield bonds are yielding only 5%.  This makes the argument for value stocks a heck of a lot more attractive than most investment options.

For example, many of the companies that are trading with high yields are in the distressed energy space.  Exxon, known for having one of the best balance sheets and most diversified business mixes in the industry, has a dividend of 5.61%.  The stock is trading at a 52-week low and has about 50% upside if you think it can get to its 52-week high.  That is a heck of a lot more attractive than just about any bond that I can think of.  That doesn’t mean Exxon will trade up tomorrow or over the next month, but over the next 3-5 years, the risk/reward seems highly favorable.  The valuation ratio is the widest between energy and technology stocks since 2000, which was a historic time to buy energy, despite most market pundits declaring it was the end of an era for the industry.  Energy isn’t a huge area of investment for us, but I do like the largest integrated players at current prices.

Most of our largest investments have very large stock buyback programs going on because they generate excess capital from their business.  Short-term selloffs make these buybacks extremely accretive and add to intrinsic value.  For instance if a stock is worth $40, but is trading at $25, by buying back their stock, the company is buying dollar bills for 62.5 cents a share.  Generally this increases key metrics such as earnings per share, free cash flow per share, and most importantly, intrinsic value per share.  If we aren’t in the process of selling a stock and a business we own has a big buyback program, a lower stock price is actually beneficial, despite maybe being painful in the short-term.  Obviously, at some point the disconnect between price and value must correct, and that is when we can lock-in profits.

With all this said, this selloff isn’t close to big enough yet to get really aggressive in my estimation.  There is a lot of risk with the impact of the virus and potential contagion, and it will take time to get a little more clarity.  With that said, at some point God-willing, the infected numbers will peak, and the market is a forward-looking mechanism.  Markets will likely rally far before the all-clear signs become obvious, so trying to time it perfectly is nearly always impossible.

Buying the dip has been rewarded over the last 11 years.  That won’t always be the case.  It likely will still be a smart strategy long-term, but that doesn’t mean we want to fire all of our bullets at once.  We have seen a multitude of 10% and even 20% selloffs during that time-frame.  Honestly, I believe we are set up better than we ever have been in terms of dealing with this, as we took a fairly conservative stance going in.  The big thing that I’ll keep reiterating is that the benefits come through when options expire next January.  The day-to-day fluctuations have a lot of non-economic noise that washes away when options expire, and volatility and time-value go to zero.  I usually step-up my writing during times of turmoil, because that is what I’d want from my money manager.  Hopefully it helps and I’ll keep you informed as we move forward.  By not panicking when times get tough, you are doing your part.  Thank you very much and please let me know if you need anything at all. 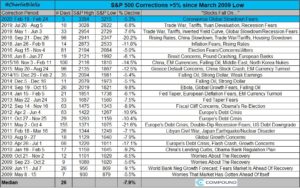