The vicious Covid-19 Pandemic is one of the most interesting and tragic times in history.  Right now, we are at an inflection point.  New cases, hospitalizations and deaths, are declining in Spain and Italy.  Deaths are likely peaking this week and early next week in our hardest hit areas of New York and New Jersey.  New cases and hospitalizations are showing very promising trends even in these areas, which augurs well for the future.  Remember, deaths are a lagging indicator.  What really matters most is real new infections, which is a number we would only know if we tested everybody.  That number is almost certainly declining rapidly, due to the aggressive social distancing policies taken.

Other major trouble areas such as Michigan and Louisiana are getting closer to peaking.  California and Washington are performing exceptionally well, with both states actually sending ventilators to harder hit areas.  The reality is that the models used by the Federal Government are proving woefully inaccurate.  Modeling is a very hard thing to do.  When I write research reports, I don’t do discounted cash flow models, because the output is only ever as good as the inputs.  Getting all those variables right is enormously challenging and fraught with errors.  We are seeing this here.  The difference is that mistakes here can either lead to many deaths, or tens of millions of unemployed.  Fortunately, I’m hopeful and confident we will see far fewer deaths than projected, and experts are starting to say the same.  Unfortunately, that is at the cost of the economy, so my hope is that we are able to open soon, but in a smart manner with temperature checks, testing, etc.

Many have argued that we shouldn’t open things up until we have a vaccine.  Our best hope for a vaccine is likely a year out, and is a big if.  We have a vaccine for the flu, yet tens of thousands die each year anyways. The unfortunate reality is we have to live with this terror for the time being, one way or the other. Unquestionably, we should protect the most vulnerable.  Antibody tests will be critical to know just who has already gotten this.

The key economic variables moving forward are the following.  When do we open? How do we open?  What fiscal stimulus is forthcoming?

The short-term recession and economic numbers will be more dreadful than anything we have ever seen.  What matters more is how long it lasts.  Can the government afford to not throw everything at this?  Covid-19 isn’t anyone’s fault.  There isn’t the same moral hazards that there were during the Financial Crisis and we can borrow at 0.7% for 10-years.  Now is not the time to fix the deficit.  There will be a time, but it isn’t during a pandemic. 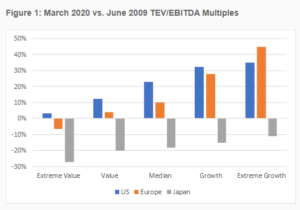 Please direct your attention to the image above.  The graph compares valuations between now and March 2009, when the stock market bottomed.  “Growth stocks in the U.S. and Europe are still 30-40% more expensive than 2009.  By contrast, extreme value stocks are already at 2008-2009 bottom levels in the U.S. and Europe.”  There is massive upside potential in these stocks, as they already factoring in the 2nd worst recession in American History, after the Great Depression. (Ignoring the 19th century, which is for another day)

Even if the market doesn’t rally too aggressively, I think it is very like that deep value stocks will have bottomed before the overall market, and they should recover a lot faster than other sectors, such as growth.  Future returns are mostly based on the prices that we pay.  The valuations I see in many names makes no sense whatsoever, and I have every confidence they will be rectified.  Companies can’t talk much now during a quiet period before earnings, but as more info and clarity comes forward, the outlook looks a lot better for many positions.

The second image shows future returns versus various economic conditions.  Perhaps surprisingly for many, when the economy is struggling, stocks often post their best returns. That is because markets look forward, not backwards.  “If you wait for the robins, spring will be over.”  Warren Buffett

Lastly, take a look at this Bloomberg article written about Michael Burry, the brilliant hedge fund manager and MD; that was famously played by Christian Bale in the Big Short.  Covid-19 is a terror that we must live with for a while.  We can beat it working together, and we will.  It isn’t necessary to destroy everything us and our forefathers have worked for to do so.  As the models continue to be proven wrong, I fully expect the narrative to shift towards opening sooner, in a calculated way.  You don’t give up on basic social distancing, or start a Mardi Gras celebration.  Other countries that have stayed more open such as Taiwan, Australia and Japan, are actually dealing with things a lot better.  Here is the article: https://www.bloomberg.com/news/articles/2020-04-07/michael-burry-slams-virus-lockdowns-in-controversial-tweetstorm

Future volatility is almost assured, but I’m getting much more optimistic on the health crisis, which makes me more optimistic on the economy.  Thank you to all of you.  It has been great seeing appreciation grow for healthcare workers, delivery drivers, store clerks etc.  While this is terrible, maybe some good comes out of it in the end.