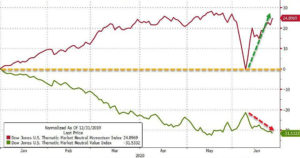 I’d like to draw your attention to the images above.  The graph on the left highlights the sharp divergence between momentum growth stocks and value stocks.  That is a 55% divergence and is one of the most shocking divides between growth and momentum in history, if not the most.  The only comparable is during the Tech Bubble, which I see quite a few parallels with.  During that time valuations meant very little, day trading was a common hobby, and cyclical companies were thrown out with the bath water.

The Covid-19 pandemic has led to a similar phenomenon this year, as the future is so uncertain in the short-term.  Companies like Amazon, Costco, and Microsoft have been able to increase their competitive position at the expense of many competitors during this time, which should benefit them for quite some time.  It is important to remember however that the market reflects that optimism.  It is still possible that they can exceed expectations and the stocks can still perform well, but it becomes increasingly hard to do it as the valuations become more stretched.

The second image shows the valuations of the top components in the S&P 500 in 2000 and 2020.  While valuations are a tad bit cheaper this year than in 2000, I’d also argue the growth prospects are substantially lower, as 2000 was still early stages for internet growth.  You can also see how horribly those stocks performed over the next decade.  It took 12-13 years for stocks like Microsoft to get back to even, and others such as Cisco, have ever gotten there.   Those years following the Tech Bust were a golden age for value investing and I think the stage is set for another one, as mean reversion is very real.

This has been a miserable year for the world and value stocks.  Even Warren Buffet’s Berkshire Hathaway is down over 20%, despite holding a larger amount of cash than ever on its balance sheet.  It is easy to make too much and obsess over a brutal 6 months, but investing is a long-term game.  Distress and turmoil plant the seeds for long-term growth.  Looking at the portfolios’ on average, we have roughly 15-20% of unearned premium on our options, much of which expires in late January 2021.  Either these options will expire worthless, allowing us to realize those gains, or we will get exercised and own more stocks at extremely compelling prices and get the upside/downside from there, which we view to be skewed heavily in our favor.

The 2nd quarter is going to be the bottom for the U.S. and global economy and we should see great growth from there, albeit it will take time to reach previous highs in GDP.  That is very good for our positions and strategy.  We need to let time do its thing.  I’m going to talk more about the pandemic providing some data in the next email, but I wanted to provide this update on valuations.  The stocks we own are trading at 20-25% normalized earnings yields.  This is insane.  Would you buy a business for a $100K that pays you $25K per annum and is likely to grow?  Even better, many of these businesses are valued at a discount to liquidation value.  Most market participants don’t care right now during this bizarre and panicked pandemic period, but over time it does indeed matter.  We’ve been through tough periods before and they have led to sharp outperformance in the following months and years, and I expect the same dynamic here.