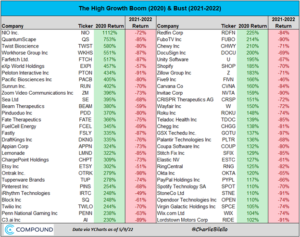 Today’s CPI inflation data came in hot at 8.3%, down slightly from the previous report, but higher than expectations. Inflation is rampant in all the key areas that impact our daily lives such as food, energy, shelter and transportation.  The sting of higher prices and the disruption emerging from the Chinese lockdowns has the global economy slowing down materially.  That could potentially be the catalyst for inflation peaking.  We are already seeing key leading indicators such as the Baltic Dry Index and key commodities declining in price, so there is definitely a reasonable chance, but it won’t seem that great as it also increases the likelihood of a recession. This is a contrary view, but I wouldn’t be shocked if we are in a technical recession right now, but the hope would be that it isn’t a long one.  Unsurprisingly, stocks, crypto and bonds have continued to tank in value.  Take a look at the image at the top of this email to get an idea for how bad it is for some of the biggest stocks.  Fortunately for us, value stocks have held up far better than growth, but when the Nasdaq is down nearly 30% YTD and the S&P is right on the verge of being in an official bear market, everyone is going to be taking hits.

The hottest fund of the last two years, ARK Innovation (ARKK) has now given up almost all of its gains since 2020, while the average investor in these funds is down huge.  This is because so many chased the short-term performance and got in when the stocks were already grossly overvalued sadly.  The psychological pendulum is arguably the greatest defining factor of financial markets.  When prices are moving up, market participants are happy to bake in the most optimistic scenarios to rationalize buying securities.  When stocks are tanking and pessimism is extreme, many market participants can’t take the pain and sell, just when securities are getting most attractive for long-term returns.

We have been in an Everything Bubble for several years.  The global economy was shutdown in 2020 and to prevent a depression from that, governments across the globe printed enormous amounts of money.  This stimulated a sugar-high of demand, but also led to inflation and a greatly disrupted supply chain.  Then we had this horrendously damaging war in Ukraine and the sanctions that came with it, which magnified the inflation issues dramatically.  We are all feeling the impact now.

Going into the year, we were not extremely optimistic on the overall market due to valuations, so we positioned very conservatively with a lot of deep out of the money options, and long positions in stocks that pay strong dividends and are very undervalued.  This has served us well, but the full benefit won’t be realized till expiration in late January as I keep reminding you.  At that point in time, volatility and time values go to zero, and the only thing that matters is where the stocks are at expiration.

To put it into perspective, roughly half of the Nasdaq stocks are down over 50% and the average stock is down right around that figure.  Just in the last 5 days, the Nasdaq is down 11%, which of course is going to jack up volatility dramatically. Of course after the collapse, most people you see on TV all the sudden become extremely bearish.  Don’t pay attention to them.  Bear markets often precede a recession, which I think is what is happening.  Markets often turn while we are still in a recession as they are forward-looking.  At some point hopefully soon, many of the key stocks will bottom, even if the overall market doesn’t.  That is a common theme in bear markets and it is nearly impossible to time the bottom.

Our approach has us buying stocks as they get far cheaper, simply by being exercised on our put options, or they will rally before expiration, and we will make the profit from the options.  Many of the stocks we could get exercised on are down 85% from their highs, so there is tremendous upside.  They are growing earnings robustly and have extremely sturdy balance sheets.  These are companies like Netflix, Disney, Lending Club, Facebook, Roblox.  We didn’t own them anywhere close to the highs, and for 4 of the 5 we only have put options that were way out of the money when we set them, and at prices where we would extremely pleased to own the shares. I’m personally adding to my account to take advantage of these and other opportunities.  I don’t know when the bottom will be, but I feel immensely confident that we will be up materially a year, 3 years, and 5 years from now, respectively, based on the portfolio valuations and fundamentals.

Of course there are things that could change that such as a nuclear war, WW3, or a comet striking earth, but I believe the opportunity is extremely favorable.  Keep in mind that many of the stocks we own such as banks and insurance companies are going to be making far more money with higher rates.  They have reserves in place for a recessionary scenario already, but the valuations don’t reflect that whatsoever.  These are times when patience and discipline are paramount. My advice is don’t watch the markets too closely here as it becomes difficult psychologically, and people make emotional decisions.  Keep your time horizon in mind and realize the surefire way of getting terrible results is panic selling.