I thought it would be helpful to look at some important market valuation metrics to give you a perspective of what type of market we are in. 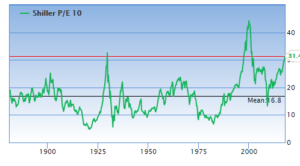 Shiller (Inflation-adjusted) P/E: 31.4.  The Shiller P/E is 86.9% higher than the historical mean of 16.8.  This implies a future annual return of -2.5%.  The only two times it has been more expensive was in 2000 and it was barely above this level prior to Great Depression.

The Total Market Index is about 138% of the last reported GDP.  Based on historical valuations, one would expect annualized returns of -1.5% from these levels.

Junk bonds are yielding a paltry 5%, despite dramatically weaker bond covenants, which is often an indicator of loose underwriting.  Momentum stocks are outperforming by 17%, the largest disparity since 1999.  The stock market is being led by the most expensive names such as Amazon, Facebook, Netflix, and Nvidia.  Remember that when the Tech Bubble burst in 2000, the Nasdaq proceeded to drop by 75%!  Value stocks went up significantly even when most people in mutual funds or index-tracking funds were getting creamed.  Often momentum and growth go in cycles.  Right now we are in a historic cycle that is favoring momentum, but the risks are some of the most extreme I’ve seen in my career. 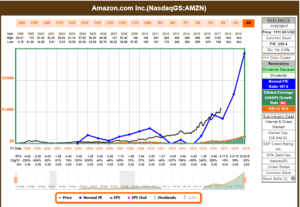 Look at Amazon for instance.  The stock is trading at $1,111.60 and has a market capitalization of $535.649 billion.  The company is expected to earn $4.17 per share this year, equivalent to a P/E of about 266.5.  Just because Amazon is able to take business away from other industries, it almost always make very little margin.  The only exception is its cloud business.  Everyone knew Cisco, Intel, and Microsoft would dominate the next decade after 2000, just like people expect Amazon to continue to dominate.  When you buy a stock for 266.5 times earnings, it is a very risky proposition, as investors found buying the leaders in 2000, only to have to wait a decade or more to get back to even. 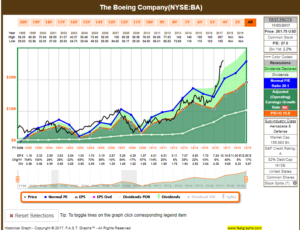 It is not just technology stocks that are overvalued.  Let’s look at a staple of the Dow Jones, Boeing.  Boeing is trading at $261.75 per share for a market cap of nearly $156 billion.  Adjusted earnings in 2016 were $7.24 per share, while this year they are close to the peak of their cycle with earnings that should be around 10.14 per share.  This puts the P/E right around 26, despite the fact that we are far closer to the peak of the cycle than the trough, so earnings multiples are generally lower for a cyclical business like Boeing.  The average P/E has been 20.1.  IF\f the stock were to trade back to that multiple, Boeing would decline by nearly 23% and it still would not be cheap whatsoever.

These are just a few examples of today’s investment environment.  Investor optimism is at its highest since 1987, when we saw a great crash.  I’m not forecasting anything like that necessarily, but risks are very high!  At T&T Capital Management (TTCM), our priority is on protecting and growing your hard-earned capital.  Notice how we say protecting first!  We scour the market for undervalued situations that are often hated by just about everybody and it has worked out very well for us over the long-term.  Right now we are in a speculative bubble so we are being as disciplined as ever.  This has hurt us over the short-term to take a lower risk profile, but we have no doubt that it is the right move in the long run.  Valuation is the number one predictor of future market performance, more so than economic growth, or anything else for that matter.

I’ll be writing more about some of the stocks that we are finding attractive in this environment and the strategies that we are employing to invest in them.  To be clear, there are a few absolutely fantastic opportunities where we have a tough time seeing any way that we won’t do well, so we are investing big in them.  Below is a really interesting video of an interview with renowned value investor David Einhorn.  This is a strange time in history with bubbles in so many areas so we must think differently than the crowd to ultimately be successful.  I hope that you enjoy!

David Einhorn says value investing will make a comeback, just like it did after dot-com bubble