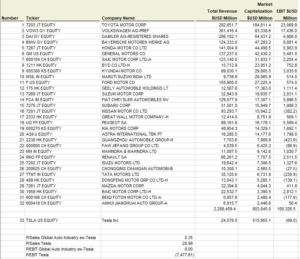 I’ve written quite a few times about the Tech Bubble that currently exists in the U.S. stock market.  No stock better epitomizes this madness than Tesla.  Over the last 12 months, Tesla generated $24.578 billion in total revenue and generated EBIT (earnings before interest and taxes) of negative $69MM.  Tesla’s market capitalization is a staggering $515.955 billion.

The entire Global Auto Industry excluding Tesla, generated $2.288459 trillion in total revenue over the last 12 months.  The market capitalization for the entire industry is just $803 billion, despite generating $100.326 billion in EBIT.

Tesla trades at 20.99 times sales, while the global auto industry excluding them trades at 0.35 times sales.  While Tesla is clearly one of the biggest bubbles in history (remember I want one as my next car), it is far from alone in the Nasdaq.  Stocks such as Amazon, Netflix, Nvidia, Salesforce.com, etc., trade at valuation levels that nobody would have believed a year ago.  There is no margin of safety and those buying are doing so mostly as a speculation that prices will go up, not on a belief that they are actually undervalued at current levels.

Meanwhile, if you look at the large U.S. banks such as Bank of America, Citigroup, and Wells Fargo, we can buy them at roughly 5-6 times normalized earnings.  This market has pockets of massive opportunity and others clearly in bubble territory, which have tended to drive the indices higher.  Eventually and I suspect as the economy opens up more forcefully, money should shift from growth to value to take advantage of the disconnect.  It is frustrating to watch bubbles like this and not be participating, but we’ve seen it numerous times over the years and how it ends.  I remember when Bitcoin rocketed to $18K in 2017, everyone wanted a piece of it.  In a very short period of time, it decline to around $3K.  Bubbles are fun going up, but awful when going down, and remember very few people buy in at the lows, most tend to chase after they have already gone up a lot.