Let’s go back to 2010 for a moment.  This was a time when the memories of the Financial Crisis and the collapse of stocks had most market participants clamoring for other types of investments.  Why would anyone want to buy Johnson & Johnson (JNJ) at 12 times earnings (earnings have nearly doubled and the multiple is now 19) when they can buy some crappy gold coin scheme with a 20% commission to the sales rep?  Those were interesting times, and those of you that were with me then know that I was very vocal in my disgust at those gold schemes, annuities, and private REITS.  It’s not that gold, annuities, or REITs can’t be good investments; but when valuations were as low as they were for equities then, it was obvious it was the time be invested in stocks!  Many brokers sell into fear to lock people into high fee, subpar returning, and low liquidity strategies.  I have a problem with that and I always will, which is why we set up TTCM, to offer what I believe to be the best strategy at a reasonable price, without conflicts of interest.

“…which is why we set up TTCM, to offer what I believe to be the best strategy at a reasonable price, without conflicts of interest.”

During that time, I was asked to go to a dinner with a sales rep for a private real estate investment trust (REIT.)  My friend didn’t know much about them, had interest, and most importantly promised me free margaritas and dinner at one of my favorite restaurants.  The product was like many that were popular at the time.  A company will try to raise $100MM for instance, to buy properties.  They say they will pay out a 6% dividend, but since they don’t own the properties yet, the dividend is really just a repayment of some of your principal investment. The 6% dividend is alluded to being almost a guarantee like in an annuity, but of course it is anything but.  The investment is not publicly traded and you are locked in for 5-7 years at least, if you are able to get your money at all, as many have frozen redemptions.  If the company is successful, you might continue to get the dividends and possibly more if the REIT one day goes public at a higher price.  The employees of this company get to pay themselves high salaries with your money, which isn’t even part of the usual 7-10% commission that the sales rep charges you up front.  That is right, so the $100MM they raise to supposedly invest, is really more like $90MM because the first $10MM goes to the sales rep.  They really have no risk and the vast majority of the reward.  Sadly, a lot of people fell for this garbage and have dealt with the consequences.

Many of these REITS basically collapsed.  They invested unsuccessfully despite the buoyant real estate markets, usually because their cost structures were too high.  Liquidity would freeze up and returns of capital would often be less than the fake price that these companies would quote in their statements, based on their internal assessments of intrinsic value.  Some that I knew even turned into Ponzi schemes.  Yes, that is right.  There are a lot more Ponzi schemes than you’d think and many aren’t big enough to really attract public attention.  A minority did okay, although I am not aware of any that did better than the stock market, or most of the publicly traded REITS that could have been purchased at a fraction of the cost.

You might be asking why I’m revisiting 2010.  Firstly, there are always financial schemes going on so you should always be aware.  Secondly, I wanted to compare it to some of the publicly traded REITS we are able to buy today.

Take for example CBL Properties (CBL).  CBL has a 40 year history of successfully developing and operating real estate in the United States.  In 2007, the stock traded up to $50.36 and the company paid out $2.06 a share in dividends, equating to a yield of 4%.    As recently as 2015, the stock traded at over $20 per share.  The high in 2017 is $11.92.  The reason for the price declines is that CBL is a developer of B malls.  These are usually the market-leading or only mall in a city or town, but are not the class A properties in a metropolis like New York.  Obviously, malls are under pressure from e-commerce and the transformational changes impacting the retail sector.  The mall operators are adjusting by reducing the footprint of department stores such as Sears, and J.C. Penney, in favor of more popular concepts.  Some examples of retailers doing really well in today’s environment are ULTA Salon, Dicks Sporting Goods, and H&M.  In addition to retail, the mall operators are adding more entertainment and lifestyle tenants.  Some examples are Lifetime Fitness, The Yardhouse, and AMC Theatres.  The idea is to make malls community destinations, as opposed to being focused too much on apparel.  For my family, we usually go out to dinner about 2 nights a week at a restaurant in a mall or outdoor retail center.  A lot of the clients I talked to have similar stories.  Much of the e-commerce that takes place is actually sold out of stores, which many people don’t realize.

Remember that CBL is not a retailer but instead is a mall owner.  Their revenues are generated by companies leasing space from them.  Virtually no new malls are being developed, so supply is actually declining.  Retail locations are usually the most profitable venue for retailers, as online typically offers far lower margins.  The big department stores pay the lowest rents, so as they close stores the malls are able to redevelop the space for other retailers at much higher rents.  This does tie up capital but offers unlevered returns between 7-12%.  Clearly, online retail will continue to grow from its roughly 12% share of total retail sales as of this year.  We have avoided mall REITS for pretty much the last decade, except an interesting investment in GGP where we did really well on as it was coming out of bankruptcy.  With that said, the price is now right to make a lot of money!

“The price is now right to make a lot of money!”

CBL trades at a paltry $5.66 per share.  Management believes that the company’s net asset value is many times higher than the current price, based on actual sale values of similar malls.  The stock recently declined because of a dividend cut to $0.80 per share, from $1.  That offers a 14.13% dividend yield at current prices.  At TTCM, we do not chase high dividend stocks, which often can be sucker plays.  However, CBL’s dividend is very well covered as its adjusted funds from operations (AFFO) have been above $1.60 every year since 2012.    GAAP funds from operating (FFO) are kind of like earnings per share for REITS.  Last year, FFO was $2.41, and this year will be over $2 once again.  CBL trades at 2.6 times on a P/FFO basis.  This means that the FFO yield is about 38%.   What this means to us is that we are buying a mall REIT that is generating a 38% funds from operation return, for every dollar we invest.  14% of that is paid to us directly as dividends.  The other 24% is reinvested into the real estate.  Some of that money goes to basic maintenance such as replacing roofs.  The rest goes to pay for the redevelopment of some of those big box retail locations into more lucrative avenues. 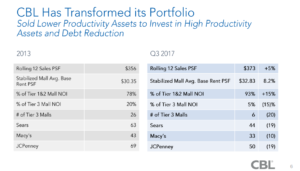 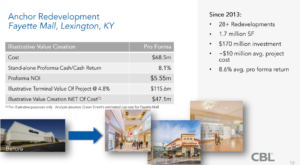 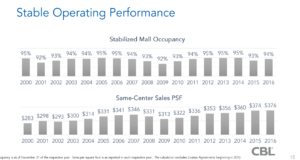 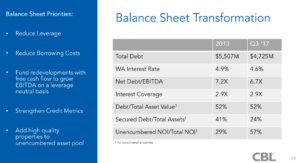 That math speaks volumes to me.  If the stock does nothing, we’d make 14% annually from here.  More likely, the stock will go up to a more normal multiple.  This stock would still be cheap at $9-$10, so we can nearly double our money.  This isn’t to say that there isn’t risk, as of course there is.  Malls are facing pressures along with retailers, which means that tenants are changing, like they always have throughout the history of retail.  In some cases, re-leasing pricing are lower as struggling retailers must adjust their cost structures for this new era.  Those headwinds though are why the stock is so cheap.  If the future is just not absolutely horrendous, we should make a lot of money.  CBL has a decent amount of debt but a lot of it is non-recourse mortgage debt.  This means that if there is a property where it doesn’t make sense to invest further, it can be put back to the lenders.  It also has unsecured debt that is spread evenly out, with very reasonable maturities for the next several years.  Management is heavily invested in the stock.

We’ve been investing in a few different companies in this sector, including CBL, WPG, SKT, GGP, MAC, and SPG.  SKT is more of an outlet mall REIT, while GGP, MAC, and SPG are A mall REITs.  Interestingly, GGP and MAC have already attracted activist investors since we have owned them, while GGP actually has an offer to be bought out at above $23 per share.  These are really great opportunities in a tremendously overvalued market.  The reason why these opportunities exist is because it is common sense knowledge that malls are facing major adversity.  Fortunately, the prices have dropped so far that, we can come in and make really good money if anything but the worst case scenario occurs.  These malls are not blind to their issues.  They are aggressively improving their balance sheets, reducing leverage, and operating costs.  CBL cut its dividend so that it could invest another $50MM a year in its attractive redevelopment projects and to reduce debt.  That is the right long-term strategy.

In conclusion, I wanted to share these insights on these hated investments.  Unlike private REITs, we have tremendous liquidity and transparency.  Instead of paying 10% commissions, we pay less than $5 for as many shares as we want.  I don’t know if the stock has bottomed, but I do know the reward to risk is stacked in our favor.  As always, if you have any questions or if I can assist you with anything at all, please don’t hesitate to contact me directly at 805-886-8140.