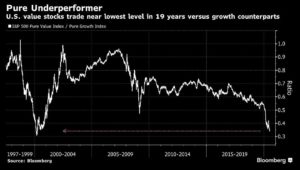 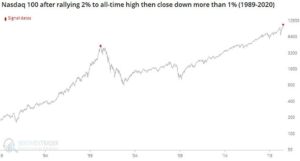 I’ve been writing to you for quite some time about the massive paradox between growth and value stocks.  The largest growth companies have become so big that they now represent the largest portion of the indices in history.  Conversely, value stocks have remained in the penalty box and are trading at very cheap valuations.  The spread has never been wider and is on par with 2000, which most people never thought could possibly happen again.  This is your friendly reminder that when the Tech Bubble burst, the Nasdaq dropped 80% peak to trough, while value stocks had 7 of the best years ever.

We saw a nice little run for value about 6 weeks ago that ended in early June, but then the divergence favoring growth started again, and led to even more extreme valuations on market favorites.  An interesting thing happened this Monday though.  The Nasdaq opened up 2%, with Tesla (prototypical bubble stock) up 16%, only for the Nasdaq to go down 1% and Tesla to go negative on the day.  The only other time that the Nasdaq has done that since 1989 was actually in March of 2000, which was right about when the change from growth to value occurred.  I’m not turning into a chartist or a market-timer on you, but we will at least see if there is anything to that.

In other news, the big banks have begun reporting what everyone knows is going to be the worst quarter, having dealt with the full effects of the lock-down. As expected loan loss provisions have been very large, and due to new CECL accounting rules, they have to reserve for the life of the loans.  This front-loads loan losses.  What is exciting though is that this means that if the economy just meets the dire expectations priced in, no future loan loss reserves would be necessary, except on new business written.  That allows the earnings power to shine through and I’m very confident we have seen the worst of things there.  I’ll write more shortly, as I really want to touch on Covid-19.  Below are a few links of information I found interesting if you ever feel like nerding out on the subject like I find myself doing.  I think Nobel laureate Michael Levitt’s theory on a lower threshold for herd/cross immunity and the seasonality of different curves, including the Northeast/Europe, and Latin America/Southwest could end up as being some of the most vital findings of this crisis.  It could be totally wrong of course, but there is quite a bit of compelling evidence regarding it, which if true, should make us a lot more hopeful. I believe the worst is over and now it is just the recognition of that, but no doubt it has created enough misery for a lifetime.  Also some promising news on vaccine front lately, so we’ll see how that goes.