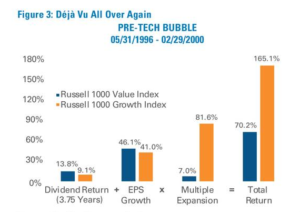 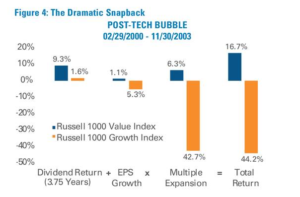 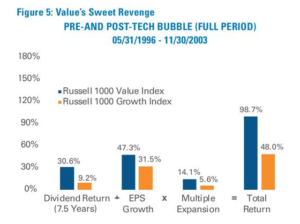 I came across a very interesting article written by value investor and market historian Richard Pzena.  As you know, the closest comparison to the current market environment is the Tech Bubble, as the most expensive companies have seen P/E multiple expansion, while value stocks have seen multiple compression.  As you can see on the 1st image, from May 31st, 1996 to February 29th, 2000, growth outperformed value by nearly 95%! 81.6% of that was driven by multiple expansion, meaning market participants were willing to pay more for the same dollar of earnings.

As the Bubble popped, value outperformed growth by nearly 60%, with value actually posting positive returns in a steep bear market.  Once again, the vast majority of the disparity was due to the multiple which people were willing to pay shifting, this time compressing for growth and expanding for value.  As we currently sit in 2020, the disparity between the multiples paid between growth and value is the greatest in history.  There is a huge opportunity for mean reversion, as the gap was widened due to the bizarre nature of this C19/lockdown induced recession, which greatly favored the Tech sector and big chains such as Target and Costco.

Over the full period from May 31st, 1996 to November 30th, 2003, value stocks outperformed growth by 50%.  That is indicative of just how steep the drop was for growth, as value more than caught up and surpassed growth despite starting at such a big deficit.  While different styles of investing have cyclical periods of out and underperformance, by far and away the worst strategy is switching from one based on recent performance.  That usually ensures the worst possible outcomes.

What give us a great deal of confidence is that we know the companies and how they are valued relative to extremely conservative estimates of intrinsic value.  The economy is recovering rather sharply, although of course there is a great deal of uncertainty with how different governments handle c19.  Many states are still quite closed, which is a headwind that could eventually switch to a tailwind, but the timing is very uncertain.  A stimulus deal is very likely to come after the election, which will be very beneficial, especially if it coincides with increased reopenings.  Obviously, the biggest thing coming is the election in 8 days, so we will see how that works out.  Some market forecasters believe we would likely see interest rates continue to drift upwards either way, which would actually be good for quite a few of our positions.

Value Having Best Month Relative to Growth in 2 Decades