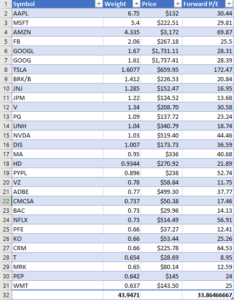 The speculative fever seems to be at full blast as we’ve seen with the wild price moves in stocks such as Tesla, or alternatives such as Bitcoin.  Many people are applying pandemic-inflated growth levels into perpetuity.  One example, I find interesting is Zoom Video Communications (ZM).  The stock rose 400% last year, as the technology became ubiquitous in an environment where you couldn’t do in-person meetings.  The stock is down 26% over the last 3 months, as many of these companies, except the big Tech companies, have started to pull back a little; as value is doing better, boosted by increasing interest rates and the slow reopening of the economy.  Zoom still trades at 124.5x forward earnings.  I find it interesting because just this week I did video meetings with a variety of products including Google and Skype, and for me, the experience is virtually identical.  Is Zoom’s competitive advantage so superior that it deserves that kind of astronomical multiple and a market capitalization of $106 billion dollars?  Maybe, but I wouldn’t bet on that personally.

Thinking about this market made me look back at one of my favorite articles written by Howard Marks in 2001, which was a relatively early stage of the Tech Bust.  I highlighted a few quotes that I thought were relevant to today’s market environment.  One of the biggest similarities is that there are obvious bubble areas and then there are areas which are still quite cheap.  That is where the opportunity is, but as the indices keep getting more concentrated in Tech, they are no longer really that passive of a bet on the stock market, as opposed to a big bet on Tech, and a little bet on the other industries too.  Below are the quotes and a link to the full article:

“Stocks of great companies– Over the years, buying and holding the stocks of leading companies has been a favorite way to strive for high return and low risk. In 1999 I heard lots of people say they were buying Microsoft, Intel and Cisco because they were sure to lead the technology miracle. They still are, and yet their stocks are now down 53%, 68% and 83%, respectively, from their highs.”

“In general, it’s great to own productive assets like companies and their shares. But occasionally, people lose track of the fact that in the long run, shares can’t do much better than the companies that issue them. Or to paraphrase Warren Buffett, when people forget that corporate profits grow at 8 or 9% per year, they tend to get into trouble.”

“As the tech stock boom reached its apex in 1999, even the keepers of the S&P 500 succumbed to the trend.  In order to stay “modern” and “representative,” they threw out low-priced Old Economy stocks that had lagged and substituted hot tech names such as Yahoo!, Broadcom, JDS Uniphase and Palm.  The effect-the error-was classic.”

“By the end of 1999, technology stocks constituted 40% of the S&P 500, and thus it no longer delivered “unbiased” participation in equities.  As usual, investors got carried away with the simplistic solution; in some people’s minds, index funds infallibility was transmuted from “incapable of failing to capture gains of stocks” into incapable of performing poorly.” Of course, the money flooded in.

The cycle turned, as it inevitably does. The recently added tech stocks hurt the S&P 500 in 2000, and indexers underperformed active managers.  On March 30, 2001, the WSJ wrote. “For investors with index-fund holdings, the market downturn makes the forget-about-it approach a much less appealing strategy then when stocks are climbing.”

“Pursuing quality regardless of price is, in my opinion, one of the riskiest- rather than the safest – of investment approaches.  Highly respected companies invariably fall to earth. When investors’ hopes are dashed, the impact on price is severe. For example, if a high p/e ratio is attached to earnings that are expected to grow rapidly, an earnings shortfall will cause the p/e ratio to be reduced, bringing about a double-barreled price decline.”