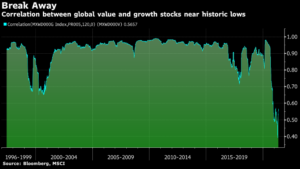 2020 was a truly unique year from a stock market perspective in that the most expensive stocks got more expensive, while the cheapest stocks got cheaper.  All of this was in spite of the year starting with the spread between value and growth already at near-record levels, with many astute investors betting on mean reversion.  Of course the reason for the extreme outperformance of growth stocks in 2020 were the lockdowns and the stay at home orders, which greatly benefited information technology and software companies, to the detriment of many more traditional industries.  It wasn’t only Tech that benefited though, as real estate also had a major boom spurred on by low interest rates and Millennials’ desire for more spacious living accommodations.

Unsurprisingly 2020 was the worst year for value investing in history from a relative performance standpoint.  Short-term performance chasing naturally caused many market participants to make the fatal error of strategy shift, chasing what had worked so well recently, which was growth stocks outperforming, and abandoning value just when it was cheapest.  Every type of strategy goes in and out of favor, but short-term performance chasing usually leads to very negative consequences.  Cathie Wood of Ark Investments became famous last year with her timely growth investments, but she too has seen her fund decline by nearly 35% from its recent highs. Because most investors got in after the major gains she experienced last year, the actual returns on real money are not very good, despite being phenomenal for the investors that got in early.

As we’ve seen the economy reopen gradually, value stocks are back in vogue and are outperforming nicely.  The spread is still very wide, so we’ll see how long this lasts, but if history is a guide, it could be 5-7 years easily.  As the graph shows above, the correlation between value and growth stocks are near historic lows, which is an example of the gap between relative valuations closing a bit.  We saw the same phenomenon in 2000 when growth stocks tanked for several years, but value stocks not only outperformed, but were wildly profitable from 2000-2007.

Various asset classes and securities have seen extreme volatility of late.  For example, two of the most glamorous assets over the last year from a performance and headline standpoint have been Tesla and Bitcoin.  Both are now down 35% from their recent highs.  Don’t get me wrong, these are still up huge and if you invested in either a year ago, you are still very pleased, but we also have yet to have seen a major correction in the indices.  It’s not like after 2000, when the Nasdaq dropped 80% over the next few years.  Maybe this is a buying opportunity, or maybe it is early innings of a major decline.  It is impossible to know, but from a logic standpoint, if you liked Bitcoin at $60,000, you probably should like it more at $43,000.

For us as value investors, we focus on cash flows, balance sheets, and future earnings prospects relative to the valuations we can buy the companies at.  For Tesla, the current valuation demands too much perfect execution for too long to deliver adequate returns and for us to have a margin of safety. I do love the cars though and I might buy one in the near future for whatever that is worth.  Bitcoin is something different of course and is not something one owns for cash flows, but instead as a bet on a decentralized asset class.  I am not a bull or a bear on Bitcoin or crypto and I understand both arguments.  While I worry about inflation and the dollar’s future prospects, I also worry about the environmental impact of crypto mining relative to the utility of it, and I’m concerned governments might choose to set up their own cryptocurrency using similar technology.  As an investor that is engaged in the market every day, I see a lot of opportunities so I don’t feel like I have to play in crypto personally, but I’m certainly open to learning more and I won’t rule anything out.  We have certainly purchased it for clients that specifically said they wanted it.

From an opportunity standpoint, we have a few deep value stocks that we are immensely excited about with 50% plus return prospects.  These are few and far between in what we believe to be an overvalued market, so we’ve also been mixing in a wide variety of options trades targeting 10-12% annualized returns, but with large margins of safety.  To me, these are extremely attractive given the extremely low interest rates offered by most bonds, and the fact that our worst case scenario is owning these stocks at 25-50% discounts to current prices in many cases.  Usually we wouldn’t find that much option premium at such conservative levels, but the last 15 months have been so crazy, that it has been quite good for option pricing if you are a seller of options.  If you have cash not doing much for you, we can get it working intelligently.