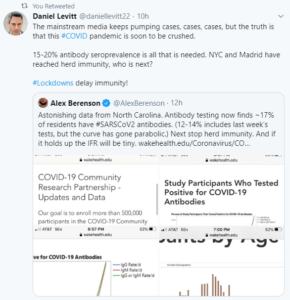 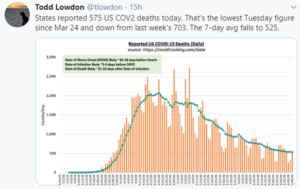 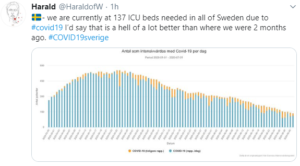 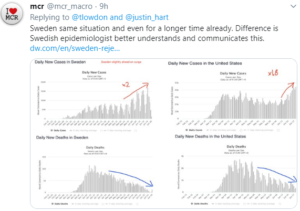 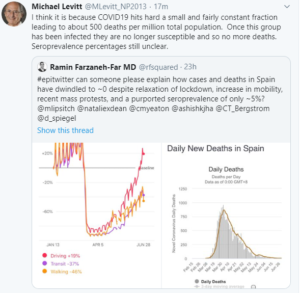 I’ve been digging into the Covid-19 situation a great deal over the last 5-6 months.  I’m not trying to portray myself as an expert in any way.  I just wanted to share some of the things that I’ve learned, as it might provide a bit of much needed optimism around the health crisis.  Please make sure you can see the images above, as many of these email services have different ways in which they show up in your inbox, so I never really know what it will look like for you all.  I’ve used a research process similar to analyzing companies, which requires extensive research of data from various sources. If you are vulnerable, please protect yourself.  I’m also very wary of the impact this epidemic and even more so, the lock-down, have had on the economy, children, mental health etc.  I’ve never seen so much fear or social unrest in my lifetime and I know we are all on the same team in hoping and praying for better times.

The narrative about Covid-19 currently is that it is re-surging in the Sun Belt states, while the Northeast has crushed it via a strict lock-down.  The media is in a frenzy about cases increasing, but seems to ignore the fact that deaths are plummeting. We always hear wait two weeks, but in states like Georgia that opened months ago, deaths have continued to drop. New cases are mostly a function of increased testing.  We are testing more than we ever have and we are doing more targeted tests in high risk areas such as prisons, farms, meat plants, etc.  The CDC has acknowledged that we have already had tens of millions of cases in the United States, but of course we only caught a tiny fraction of that via our testing, likely less than 1/10th.  This means that we’ve experienced much greater contagion, but also that the infection fatality rate (IFR) is far lower.  If we had the same level of testing we have now, we would have captured far greater case numbers during the peak of the epidemic. The CDC’s last IFR estimate was .26, which is a bit worse than the flu, but of course deaths are heavily skewed towards the elderly.  Covid-19 is very different than the flu and has some very nasty and tragic aspects to it, but I’m just using the IFR to put it into statistical context.

Over 50% of our deaths occurred in nursing homes and long-term care facilities.  When these facilities get infected, death rates surge.  When they don’t, you get tons of cases but far lower fatalities.  Currently, cases are skewing towards the younger demographic.  There also seems to be a major impact from legal immigrants or ex-pats coming across the border from Mexico to seek better hospital treatment.  Mexico is having a terrible time w Covid-19 and is seeing some of the highest positivity rates of anywhere.  As we get more infections and people recover, developing antibody and t-cell responses to the virus, herd immunity can develop.  While initially there were theories that suggested you’d need roughly 60% of the population to get infected, there are studies that show cross immunity with more common viruses such as the common cold in many people.  This would potentially imply that herd immunity can occur at a much lower rate of infection, possibly between 15-25%.  That can still lead to many tragic deaths of course, especially if the most vulnerable get it.  Once again, I’m not an expert and there will be differences of opinion, but these are the opinions of experts that have been pretty accurate thus far on Covid-19.

Sweden was the only country that didn’t dramatically change their way of life or lock-down due to Covid-19.  While they did have a similar nursing home problem like we did, hospitals weren’t overwhelmed and now they are seeing ICU utilization and deaths decline dramatically.  They still see high amounts of cases, but they are testing a lot more like us, and fatalities have been dropping for an even longer time than us.  This would bode very well for us if our fatalities keep declining, despite higher diagnosed cases.  Keep in mind that many of the deaths we see reported daily occurred many days, or even weeks ago.  Many deaths have been reclassified as Covid and there do seem to be some financial incentives to list Covid as a cause of death.  Critics will point to Sweden having a higher fatality rate than its closest neighbors, but they have done much better than most European countries, and importantly, they are likely through the worst of it.  Barring a vaccine, which is a big question mark, we likely will have to deal with Covid-19 for a very long time.  Sweden’s economy held up far better than others unsurprisingly.

If you look at Italy, Spain, New York, and Stockholm, there seems to be a case that many of the hardest hit regions have reached herd immunity.  Deaths are plummeting.  Where there is increased testing, you’ll still find cases, and areas that weren’t hit as hard eventually seem to need to get hit.  I think that as states like Arizona, Texas, Florida, and California deal with these infection surges, they will get closer to where the Northeast already is.  Better treatments and insulation of the most vulnerable segments of the population should lead to far lower fatalities than what were experienced earlier in the pandemic.  It has been about 19 days since the surge in cases, but deaths have continued to drop.  Hospitalizations have increased a bit, but many of those hospitalizations are people going in for something like a car accident and then being diagnosed with Covid as well, as everyone is being tested at this point.  In Miami, 1/3rd of the people that went into ER for something like a car accident, were diagnosed with Covid-19, and would count as a Covid hospitalization.  It isn’t uncommon for hospitals to be at 85-95% of capacity, as that is how they make money.  Cities have created surge capacity plans to deal with Covid-19, which might be used in some cases.

We will still see Covid-19 deaths, just like people still die from the flu during the summer month off-season, but at a lower rate.  We will see if deaths truly spike again, or if they continue to be level or drop, despite increased diagnosed cases.  There are no easy solutions to this crisis, but I’ve talked to many people that have been so discouraged and depressed, so I thought it would be worth discussing some of these findings.  Perhaps these theories will prove wrong, but only time will tell.  Wishing you all a wonderful 4th of July holiday if I don’t write to you again before then!

Value Having Best Month Relative to Growth in 2 Decades